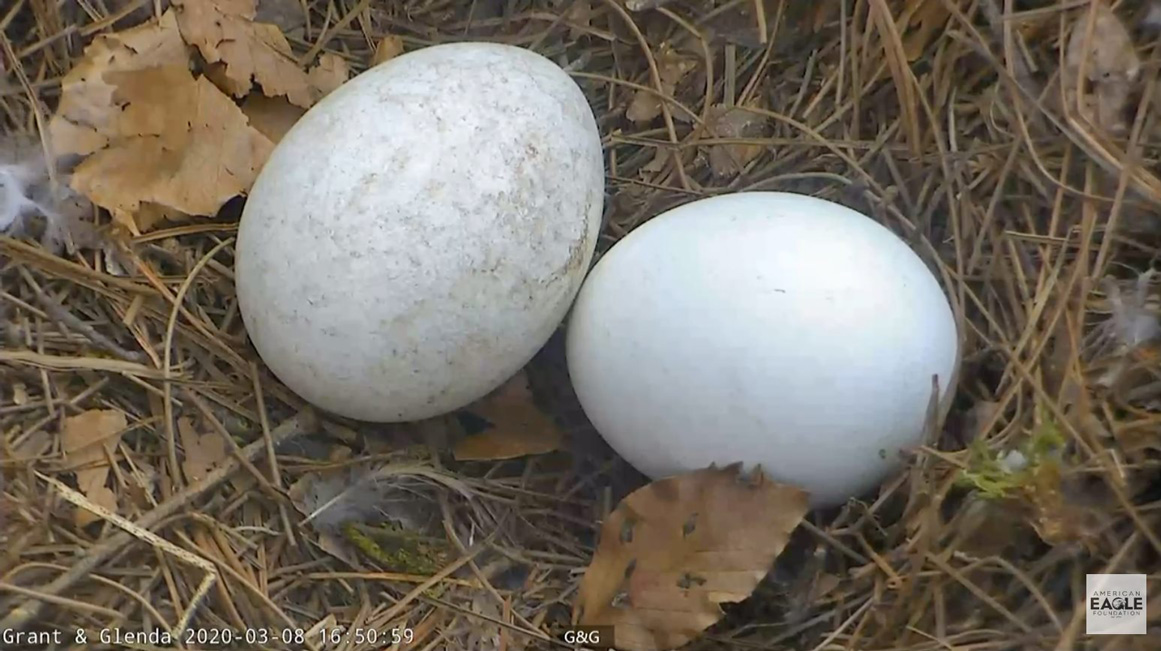 Two eggs laid on March 4th and March 7th are being cared for by Grant and Glenda. 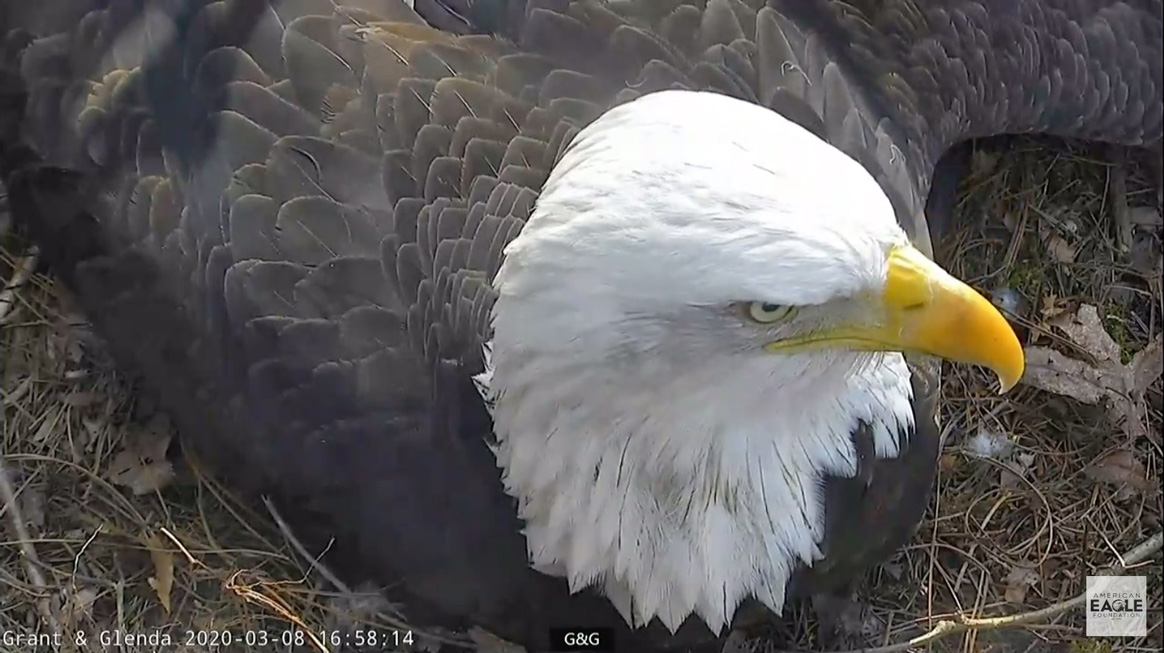 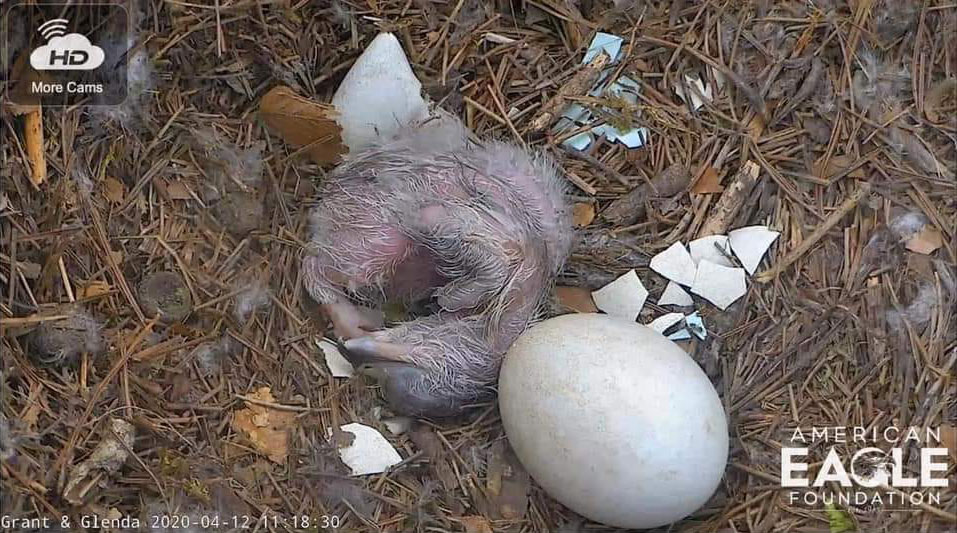 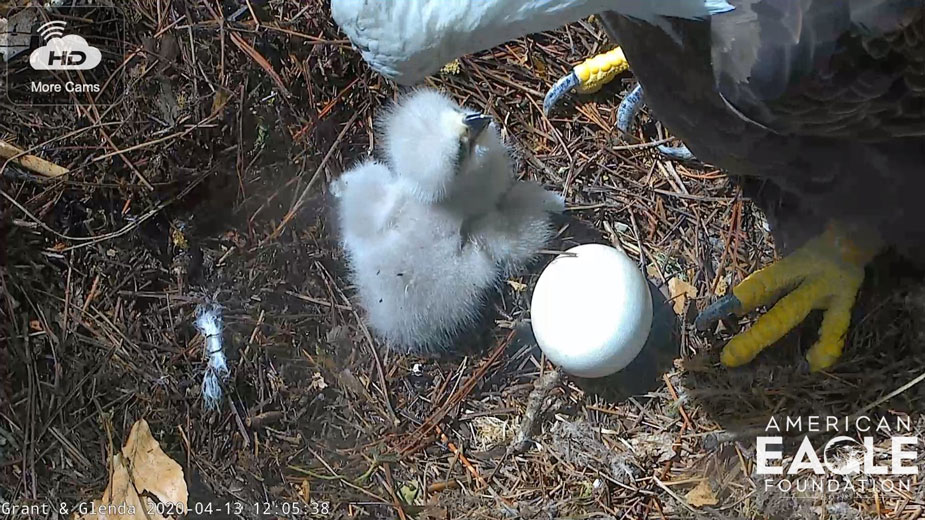 A day after hatching, we see little GG3 all fluffed out.

Update 4-30-21: Unfortunately, no eggs were laid this season

Grant & Glenda are permanently disabled, non-releasable Bald Eagles that were transferred to the American Eagle Foundation in Pigeon Forge, Tennessee and will receive the best of care for the rest of their lives. Both Glenda and Grant were residents in our Pick-a-Mate section.

In 2017, after it was observed that they seemed to have developed an attraction for each other, they were then removed from Pick-a-Mate and moved into their own private aviary in the aviary at Eagle Mountain Sanctuary. Their neighbors are Mrs. Jefferson & Isaiah on one side and Pick-a-Mate on the other. They were first featured on cam in 2018.

Glenda was discovered injured in Spokane, WA in June 2012 and taken to the Washington State University’s Veterinary Hospital raptor program for treatment. She was in extremely poor condition with multiple injuries and very sick. Her story was publicized on national TV, and the American Eagle Foundation volunteered to give Glenda a permanent home if she could not be released. She actually beat the odds, got much better, and was released, but was found again in 2013 unable to fly. At that point she was deemed non-releasable. Several of the 2012/2013 moderators for the Dollywood nests graciously contributed to the cost of bringing Glenda to AEF, where she arrived in April 2014, weighing in at 11.6 pounds – an absolutely gorgeous eagle.

Grant, formerly known as Providence, is an adult male Bald Eagle. He had been treated at the Wildlife Center of Virginia for a fractured bone, but during recovery he developed problems with his left wrist, which left him permanently disabled. He was transferred to the American Eagle Foundation in July 2009. Grant has a noticeable injury to his beak (which is healing) and is much smaller than Glenda.

This aviary at Eagle Mountain Sanctuary is home to our female bald eagles with partial flight ability.

The female bald eagles residing within Eagle Mountain Sanctuary are all permanently disabled and are no longer able to survive on their own in the wild.

This aviary at Eagle Mountain Sanctuary is home to our male bald eagles with partial flight ability.

The male bald eagles residing within Eagle Mountain Sanctuary are all permanently disabled and are no longer able to survive on their own in the wild.

Residents in this aviary are as follows – Aquila, Faithful, Hamilton, King George, Massena, and Roosevelt.

Join us on social media!

At Dollywood (Pigeon Forge, TN) guests can stroll along the edge of Eagle Mountain Sanctuary, where they will see the largest exhibit of non-releasable Bald Eagles in the United States. The Bald Eagles residing within Eagle Mountain Sanctuary are all permanently disabled and would not be able to survive in the wild. This 400,000 cubic-foot aviary houses two Bald Eagle nesting pairs in separate breeding enclosures, as well as about a dozen other non-mated, co-habitating eagles, all cared for the non-profit American Eagle Foundation.

Eaglets hatched and raised at Eagle Mountain Sanctuary are transferred to the AEF’s hacking tower at about 6–7 weeks of age where they will acclimate to a wild, natural setting into which they will be released at fledging age.

Fresh food (quail, fish, rats) is delivered daily to the eagles by AEF caregivers and left at the bottom of the hill; the parent eagles choose what they want, and then bring it back to the nest to feed themselves and their eaglets. There is also a bathing/watering tub at the same location, which the eagles often enjoy.

If you have questions about the Eagles and would like to have a more in-depth conversation, email Dollywood Eagle Cam.

If you would like to have technical questions about Chat answered, or if you are having problems setting up an account, email our webmaster.

Thanks for visiting!
Please tell your friends about us, and come back often.